*This post may have affiliate links, which means I may receive commissions if you choose to purchase through links I provide (at no extra cost to you). As an Amazon Associate, I earn from qualifying purchases. Please read my disclaimer for additional details.

There will always be those times when you go all DIY and try to fix mechanical faults yourself. At such times, having the right tools would make things as easy as possible for you.

When you intend to work on mechanical parts that need to be loosened or tightened, you will need wrenches.

But the thing with wrenches is, there are so many of them, and if you do not get the right one, you will not get the outcome you desire.

The male types are inserted onto the head of bolts and screws with complementary recess. The female types are like sockets into which bolts, nuts, or screws fit.

The adjustable wrench is sometimes called a crescent wrench. As the name says, it can be adjusted to fit bolts, nuts, and screws of various sizes.

This is made possible by the spiral screw, which opens or closes the wrench’s crescent as you turn it.

Since this type of wrench can be adjusted for bolts, screws, and nuts of various sizes, it can stand in for a complete set of open-ended or combination wrenches.

One issue with adjustable wrenches is their thickness. They are generally thicker than combination and open-ended wrenches. So they may not work in tight spaces.

Open-ended wrenches are a regular in many toolboxes.

They are typified by two U-shaped ends on either extreme of the shaft. One of these ends is usually a bit bigger than the other.

This type of wrench is typically used to loosen or tighten bolts, nuts, or screws that are hard to reach.

The open-ended design makes it easy to get the target vertically or horizontally. However, relative to box-ended wrenches, it is more likely to wear the edges of bolts.

The ends of their shaft are graded loops. These loops are of different sizes and are designed to either fit hexagonal or square bolts.

Compared to open-ended wrenches, box wrenches offer better torque. So they might work better for tighter bolts or nuts. They are also less likely to wear off the edges of your bolts and nuts.

The combination wrench is a hybrid of the open-ended wrench and the box-ended wrench. It comes with a shaft that has a U-shaped opening and a graded loop on either end.

The two ends of a combination wrench work in synergy; the loop loosens tough bolts or nuts, while the U-shaped end does the unscrewing. Of course, these ends may also be used to tighten the same bolts and nuts.

The Allen wrench is a key wrench, also called hex key. It is basically a hexagonal rod bent into an L-shape or forged into a T-shape.

Allen wrenches are male-type wrenches. One end is fixed into hexagonal recesses atop screws and bolts, while the other is turned to loosen the target.

The advantage of this wrench is that the longer end can help you reach deeper bolts and screws.

As the name says, pipe wrenches are used on pipes. So, as you may have guessed, they are more commonly used by plumbers. It is an F-shaped wrench with a movable jaw and a fixed jaw.

The movable jaw of a pipe wrench is used to adjust the space between both jaws to fit pipes of different sizes.

Both jaws of a pipe wrench are serrated to offer some grip. But then these serrations may also leave marks behind on the pipes.

Chain wrenches are used to loosen or tighten pipes of larger diameters. They are applied in situations where pipe wrenches may not work.

Chain wrenches come with a chain and a shaft with a serrated end. The chain works like the movable jaw of a pipe wrench, while the handle or shaft works like the fixed jaw.

Lug wrenches are either L-shaped or X-shaped. The L-shaped variety usually has a socket on one end and a wedge-shaped tip on the other.

On the other hand, the X-shaped lug wrench comes with a socket on each of its ends. Each one being of a different size.

The sockets of lug wrenches are generally used for loosening or tightening bolts on vehicles. This is why they are commonly called wheel braces.

The wedged tip on an L-shaped lug wrench can be used for prying hubcaps from wheels. They may also be used for other similar purposes.

The length of a lug wrench is vital to how much torque you can apply when tightening or loosening a bolt. The longer the shaft, the more force you can put into it.

Torx wrenches come in an L-shape like Allen wrenches. Alternatively, you may get your Torx in a set like a swiss army knife.

The ratcheting wrench is like a combination wrench. It has one U-shaped end and one loop end. However, it differs because of the ratcheting device installed in at least one of the extremes.

The ratcheting device makes it possible for you to turn the wrench without lifting it off the bolt or adjusting its position.

This way, you can work in tight areas with ease. Even when you hit obstacles, you can keep going without getting the wrench off.

A torque wrench offers a specific amount of torque, meaning you never have to tighten the nut or bolt excessively.

The amount of torque is usually calibrated: digitally, manually, or in other ways. The calibrations are also determined by the manufacturer.

Torque wrenches are commonly used to tighten wheel lug nuts in vehicles. But they may also be used on bicycles, tractors, and other similar equipment.

Once you see this wrench, you will definitely know why it is called dog bone wrench. It is shaped like the typical dog bone. 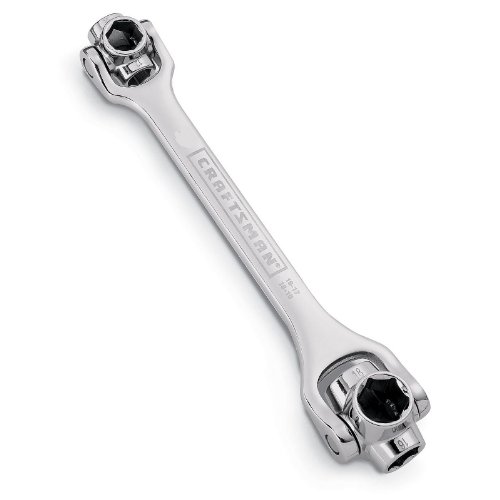 The dog bone wrench may also be called dumb-bell wrench. It comes with two box-shaped ends, and each of these ends has a socket on its 5 surfaces. But the sockets are of different sizes.

More times than not, you will find a dog bone wrench being used in a bike. However, sometimes, it may be used to get into tight spaces.

A hammer wrench may also be called a striking wrench. One end of this wrench comes with a loop, while the other is a block end.

The block end is used to transmit greater force to an object when hit with a hammer or sledgehammer. This brute force may come in handy when trying to undo rusty or jammed bolts and nuts.

On the other end, the loop is used to tighten or loosen flange fasteners and fittings.

A drum key is a T-shape socket wrench with square holes on both ends. As hinted by its name, this wrench is used to tune drums and similar musical instruments.

The length of the handle of a drum key varies. So, if you want to get enough torque while turning this wrench, get one with a longer handle.

The monkey wrench is a bit like the pipe wrench. They are both F-shaped, and they both have movable jaws and fixed jaws. However, the jaws of a monkey wrench are smooth, not serrated.

A monkey wrench is a form of adjustable wrench. You can adjust the movable jaw by turning the spiral screw or the round nut on the shaft.

Monkey wrenches are used to clamp pipes. They may also be used to fasten or loosen lug bolts, nuts, and screws.

Spark plug wrenches come with one hexagonal end and a circular end. This type of wrench needs a T-bar handle to function.

So, at the circular end, you will find 2 openings through which a T-bar handle can run. In some cases, the wrench comes with the handle already welded to it.

Of course, being a spark plug wrench, this tool is used to loosen or fasten spark plugs. So, it would work on any machine that uses a spark plug, including cars.

Tension wrenches look pretty similar to tweezers. They are a vital piece used in lockpicking – they create some stationary tension as the pick works the barrels.

Tension wrenches can either be rigid or flexible, depending on the manufacturer’s design.

Tap wrenches may either be T-shaped or a double-handled bar.

The double-handled bar/straight-socketed variety comes with an attachment socket in the middle. The said socket fixes into tap attachments.

The T-shaped variety, on the other hand, comes with an adapter that fits bits directly. Tap wrenches help in threading the inner parts of nuts and similar fits.

They may also be used alongside other tools like square-shanked bits. When used as such, it works as a reamer, drill, or screwdriver.

Flare nut wrenches have box-like ends, but unlike actual box wrenches, the loops do not close completely. The opening from the incomplete closing would fit just around a tube while maintaining its grip on nuts.

This type of wrench is used on fittings beneath sinks and nuts in spots closed-socket wrenches cannot get to. Flare nut wrenches are particularly helpful when working on less durable metals, which open-ended wrenches might damage.

An impact wrench looks so much like a cordless drill. However, it is a wrench that uses compressed air or power from a battery to drive torque.

The torque from impact wrenches is pretty high. This is why they come in handy when trying to loosen tough bolts and nuts.

Impact wrenches are particularly handy when working on multiple bolts or nuts. But they do not offer much in terms of precision.

A stubby wrench is basically a combination wrench with a short shaft. Hence, the name. The structure of a stubby wrench drives portability and makes it easy to reach into confined spaces.

In some new designs of the stubby wrench, the ends are hinged. So, you can angle the tool for an even better fit.

Pedal wrenches come with a rounded end designed with one or two U-shaped recesses at the edges.

Pedal wrenches are used when working on pedals. So, they are typically used on bicycles, pedal boats, and similar machines.

Cone wrenches are used when working on the cone part of a cup-and-cone hub. More times than not, they are used on bicycles. But they may also be used to tweak a washing machine’s leveling feet.

Besides these, cone wrenches may be used in less intense repair works where an open-ended wrench would ordinarily be used.

Fire hydrant wrenches come with a handle attached to a pentagon-shaped end. As the name says, this type of wrench is used solely on fire hydrants. In essence, this is the only tool that opens a fire hydrant.

The handle of a fire hydrant wrench is usually long and adjustable. The longer the handle is, the more torque you can put into it.

Last on our list is the fan clutch wrench. These wrenches come with a U-shape recess at one end and a tiny square at the other.

Fan clutch wrenches can be used in the same way as open-ended wrenches for less intense works. They may also be used as a clutch holding tool.

Hi there, my name is Tony. Having worked in the construction industry for over 30 years and being a weekend warrior on my own home I definitely have plenty of war stories to share. Have a topic or project you are interested in trying? Let me know and we will try to put together an article or video on it!